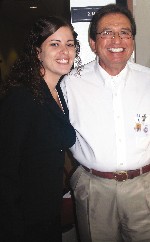 From age 10 until age 17, Veronica's mother had lost control of her daughter.  Although a bright and athletic child she defied rules and began running with the wrong crowd.  At age 17 she was charged as an adult but her juvenile judge took a chance and placed her in juvenile facility for girls.

She met Ms. Rose-Green who broke down her defense and exposed her strengths.

Today she is a 2nd year law student.  Read a recent article on Veronica written by the Florida Bar Association.